One of the reasons which sped up our moving to Tel Aviv, was the discovery that we had been living inside a suspectful dream. For the past year and a half, we rented a romantic two-rooms apartment in the idyllic settings of the artists village of Ein Hod, surrounded by nature. Or so we thought. Until one day, when we saw denied the permission to hang some screws in the wall, we inquired as of the nature of the construction walls, just to found out that our lovely house was entirely made of prefab compressed asbestos boards. Asbestos? I was not positive about the Italian translation of the word, so I rushed to the dictionary online, just to see my worst nightmares come true.

So let me rephrase: we were surrounded by one of the most dangerous man-made materials in the world, known to cause lung cancer, and only after, by nature. “The house was brought up hurriedly and without much money in the 70s” – told us the landlord, when we questioned her. “I have lived here for 40 years and raised two children: there is nothing to fear about these walls.”

Unconvinced, we called up the Israeli Ministry of Environment Protection, who assured us that if the walls looked intact, with no sign of abrasion, we should sleep tranquil nights. But we didn’t. I didn’t.

We then attempted to make a move into the city to find, paradoxically, healthier living conditions. Great was my surprise when in the heart of Tel Aviv, in areas of high real estate value, I come across even more asbestos. Inspecting apartments, I kept an eye for the easily recognizable, wavy cover boards. 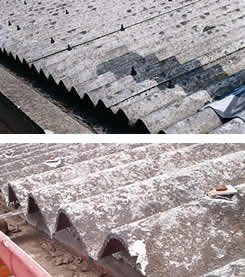 Two apartments had a balcony topped with asbestos plates, with small children happily playing underneath. “Excuse me – I asked – is this roof made of asbestos?“. “Mmmmh…. I don’t know… is it?”. Another apartment, in Hadar Yosef, had the whole rooftop made of asbestos. The owner was aware of it, and did not try to conceal it. As a measure of protection, she had covered it with a rubber mat, “to prevent cats from scratching the surface“. Should this quiet our concerns? Price of the apartment: 5.400 shekels per month, including an increased risk of developing lung cancer.

In Italy, when you say “amianto” (=Italian for asbestos), people’s hair stand up. We associate this word with dreadful public buildings of the 70s, unhealthy constructions practices which have been long discontinued. In Israel, manufacture and use of asbestos began in the 1950s, reaching a peak in the 1970s: a cheap, versatile and solid construction material became available to accommodate the needs of a rapidly increasing population. Following worldwide concern on the carcinogenic effects of asbestos products, the use was dramatically reduced.

Another problem linked with asbestos is that once it is there,it is not easy to get rid of.

Asbestos has a very insidious and dispersive nature: it is composed of tiny fibers, which are very light and, once broken, can travel great distances. These fibers are easily inhaled and can lodge in the lungs for a long time. It is enough to breath some, and you are set up for respiratory problems and increased risk of lung cancers. Remember the health concerns faced by rescue team workers after the collapse of the Twin Towers? What do you think the towers were made of?

So today, when I read about an IDF base near Ektziot being mapped out as a dangerous asbestos site, it does not surprise me at all. The Enviroment Minister website reports that

“An asbestos survey was conducted in 1998 in army camps throughout Israel. The survey discovered some 10,000 square meters of pical (asbestos) boards in Israel. These boards (containing some 40% asbestos) are frequently used in army bases as wall partitions and bulletin boards”.

During the implementation of an asbestos removal project, “additional asbestos-containing boards were found, well beyond the original estimate of 10,000 square meters. In fact, by June 2005, some 43,000 square meters of pical boards had been identified“. If fancy apartments in Basel, rented out with nonchalance for over a thousand dollars a month, are made of asbestos, why not army bases? Public libraries? Kindergartens? Hospitals?

The same website also provides reports on school buildings. The data are chilling:

“A survey conducted in 76 educational institutions known to contain asbestos was conducted in the summer of 2003 in the city of Bat Yam situated in the center of the country. Asbestos containing structures were found in 61 institutions – 80% of the schools. Within these schools, most of which were kindergarten, some 105 structures were found to contain asbestos containing materials. Only 12% of these were in good condition.”

Although I can choose at a personal level to live in an asbestos-free building, that does not put me or you or anybody in a safety zone, since it is enough to have asbestos next door to suffer the same risk hazard. The solution to this public health threat can only be implemented by a national plan. With Israel’s intricate political problems, security issues, immigrants expulsions, religious extremism, the ghost of terrorism, the Iranian threat, the state and its people are simply too distracted to be able to focus on environmental policies. I honestly don’t think getting rid of asbestos will become a top national priority in the near future.

In the meantime, you can do some reading around: Naharya, once home to the only asbestos plant in Israel, is becoming a world leader in lung cancer; asbestos waste are happily dumped in Jaffa’s poor neighborhoods by unscrupulous villa owners.

“It is estimated that some 100 million square meters of asbestos cement are found in industrial buildings, agricultural structures, roofs of private buildings, educational institutions, parking areas, and army camps throughout Israel.”

“Asbestos is also a known carcinogen.” (website of the Environment Ministry of Israel).

How they say it in Hebrew? Be karov, etzleha. If not already.

One thought on “Asbestos? No thanks”